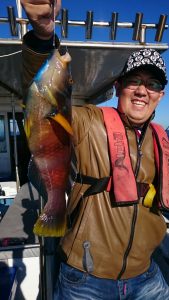 Rip Runner has had a great run of fishing recently. With all this fantastic Winter weather we have had several opportunities to head out fishing. A few of our Chinese clients have been booking regularly, departing Sorrento Pier and most times getting out into Bass Strait where the target species has been Blue Throat Wrasse, Leather Jackets, Sweep and Perch. Winter time is a particularly good time for these species. 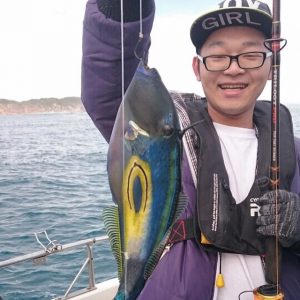 Rip Runner left the Sorrento Pier on Saturday the 27th of May with a group of 7 passengers on board. They headed out through Port Phillip Heads and into Bass Strait where the customers where keen on catching Reef species. They headed down to Portsea back beach where they found an abundance of Blue Throat Wrasse, Leather Jacket and Sweep which the customers were very excited about. 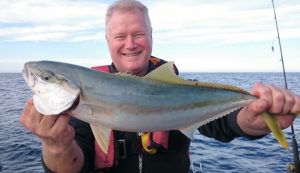 It’s been a busy weekend for Rip Charters. Fishing out of Sorrento Pier and Queenscliff Harbour we did several trips over Saturday and Sunday. With fantastic May weather and beautiful conditions in Bass Strait, Snapper fishing was on the cards and we delivered with some great Snapper, Flathead, Nannygai, Thresher shark and Gummy shark. Big Blue had a bucks party on the Saturday and had a great catch of Ocean Flathead, while Rip Runner fished the deep reefs off Barwon Heads securing plenty of good sized Snapper, with one lucky fisherman managing to wrangle a decent size Kingfish for this time of year. 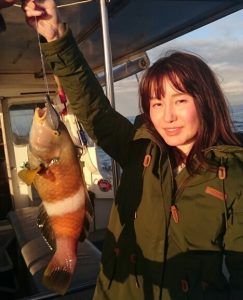 We took a nice group of Asian clients out for a fish in Port Phillip Bay during the week. They hired the whole boat and we departed Sorrento in the afternoon, the weather was great and we headed down towards Port Phillip Heads. They caught loads of Blue Throat Wrasse, big Leather Jackets and Parrot Fish and were really happy with the trip. 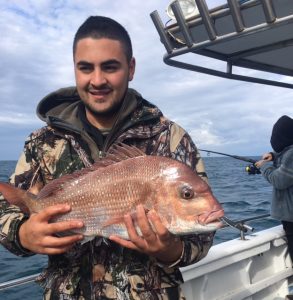 This weekends fishing Charters out of Sorrento, on the Mornington Peninsula had both boats, Big Blue and Rip Runner, departing Port Phillip Bay and heading out into Bass Strait for an Ocean fishing charter. The weather conditions turned a bit cold, but the fish didn’t seem to mind. 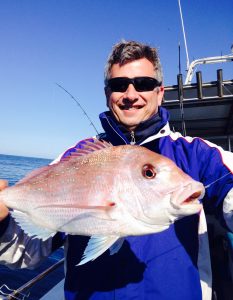 April 23rd, 2017
Big Blue, our 42ft Charter vessel, departed Sorrento Pier to do a fishing trip out in the Ocean and we headed down to Barwon Heads. We had a mixed group of individuals on board, who were all looking forward to catching some snapper. 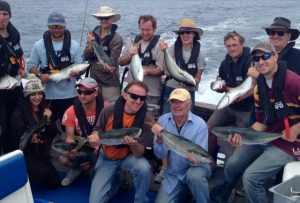 These specialised Ocean Fishing Charters offer the best opportunity for success in landing one of the oceans greatest fighters. Potential target species include Mako Sharks, Thresher Sharks, Gummy Sharks and other species including Snapper, Kingfish, Bass Strait Flathead, Aero Squid and a large variety of Reef Fish.  Captain Phil has been fishing his Ocean backyard for 31 years, he is the longest charter boat skipper in the area and if anyone knows where to go in Southern Bass Strait, he’s your man.

February 5 2016 Bass Strait – Yes…it’s that time of the year again where many anglers start to think all things kingfish….especially around the Port Phillip Heads Rip area and also outside into Bass Strait.  Hopefully this season will be as good as the last year on the kingfish front and we see plenty of […] 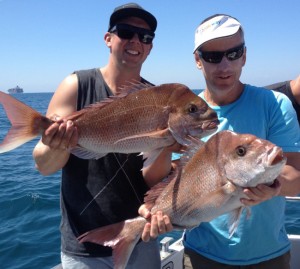 With no specific start date, Victoria’s annual Snapper migration usually begins somewhere in September/October and goes right through till the end of May down at Barwon Heads. In the early stages of the migration, the snapper follow a predictable path, reports of Snapper catches will come in from Queenscliff, Mt Martha and Mornington. The Lonsdale […]

4 or 5 Hour Private Charters including Sausage Sizzle BBQ. Great idea for the next Bucks trip, gather your mates and get out for a fish.

Under 18 or 70 years and over, pensioners and seniors card holders dont need a fishing licence but everyone else in between does. You can buy yours online at Victorian Recreational Fishing Licence