Bass Strait – Yes…it’s that time of the year again where many anglers start to think all things kingfish….especially around the Port Phillip Heads Rip area and also outside into Bass Strait.  Hopefully this season will be as good as the last year on the kingfish front and we see plenty of quality models caught by anglers both bait and lure (jig) fishing…  As always play it safe if you are thinking of going out into these areas to fish.  This time of year is also when bluewater anglers start to chase Mako sharks offshore.

Bellarine Peninsula –  Ocean Grove/Barwon Heads – Offshore from Ocean Grove and Barwon Heads, Kingfish have arrived and are keenly snapping up surface lures once schools of fish are located.  In the 50 – 70 meter depth, Mako and Blue shark are in some of the best numbers in a long time.   A liberal berley trail is a must when chasing sharks.

Mornington Peninsula – Portsea/Rosebud – Should also be a good feed of tasty King George Whiting over the Easter period (if you are thinking about heading down the peninsula way)… Hopefully we can all look forward to some fantastic Port Phillip Bay whiting fishing over the months ahead.  Best baits for the K.G.W have been pippies, pre cut squid strips and mussels. Try to fish the sand patches in amongst the weedy – reef areas.

The southern calamari in Port Phillip have continued going gangbusters in our more southern section of the bay between Rosebud, Rye and Sorrento through to Portsea.

Mount Martha/Rosebud – Pinkie snapper are always worth a try from Mount Martha through to Rosebud breakwaters at this time of year with dawn and dusk the best bite times.  Cut pilchard, blue bait and squid are definitely your best options for the pinkies.

Blairgowrie/The Rip – Big schools of quality salmon have at times been great fun for anglers fishing our more southern bay waters between Blairgowrie through to the Rip, with chunky models up to approx 3kg being caught.

Mount Martha – Snapper started showing up in the area.  Here at Rip Charters we have been working the area all week and have been producing good snappers ranging 1kg – 4kgs.  It’s going to be a good year to come in the area.

Symonds Channel – Flathead started showing up in good numbers.  Down South there are also plenty of Whiting and Squid showing up.

Pinnace Channel – Whiting getting caught and plenty of Squid in the area.

Rye – Portsea – Salmon have been showing up at the wall, plenty of trevally getting caught in the area, along this stretch Rye through to Portsea there also been Whiting and Squid caught.

Rosebud – Snapper been getting caught in shallow waters.  Whiting and Squid are coming up with good numbers.

Bass Strait – Danny and his crew on Rip Runner are still producing good numbers of fish out in Bass Strait.  Plenty of Snappers 2kg – 5kg getting caught.  Large tiger and large blue spotted Flathead.  They had a few nice ocean Whiting showing up and loads of other mixed bags of fish.

With windy conditions last week anglers focused on more secluded areas.  The Queenscliff Boat Harbour once again held great numbers of Silver Trevally to 40cm for anglers casting soft plastics in the main cut and around the moored boats.  Some of the best results achieved by anglers came from those fishing at night, with Trevally holding in and around lights that attract schools of bait.  From all reports the large squid are still on offer for those prepared to fish deeper sections out from Queenscliff Bight, here in the fast water larger jigs will work the best.  Schools of Australian Salmon have, from time to time been spotted feeding on the surface and are more than willing to devour a white ocky skirted lure,  trolled on the outside of the commotion.  Here at Rip Charters we went out in Bass Strait and had a blinder of a week smashing Snapper, ranging from 2kg to 5kgs and also had plenty of mixed bags, like big Flatheads, Leather Jackets, Australian Salmon, Trevally and Gummy Shark.

Snapper are on the bite!  Bass Strait at Barwon Heads have produced a large number of snapper this week in 40/50 meters.  Good size fish from pinky up to 6kg.  Mt Martha through to Rosebud are fishing well with good numbers, best time is sunrise and sunset.

The whiting are biting from Sorrento through to Rosebud.

Great increase in size and numbers of Southern Calamari, best location in the bight between Lonsdale and Queenscliff.

Portsea has had a great week with plenty of Squid.  Nepean Bay has had a return of King George Whiting, best tide on the flood in 10.6 meters.

Spring fatties are on the bight at the top of Simmonds Channel.

Keep an eye out for the Salmo  as they have been schooling up again with plenty of bait around.

Calamari are at their best in November and are now showing good numbers in Queenscliff, Sorrento and up to Rye.

Offshore school snapper are plentiful off Barwon Heads with a few gummies mixed in.

Join us across Port Phillip Bay 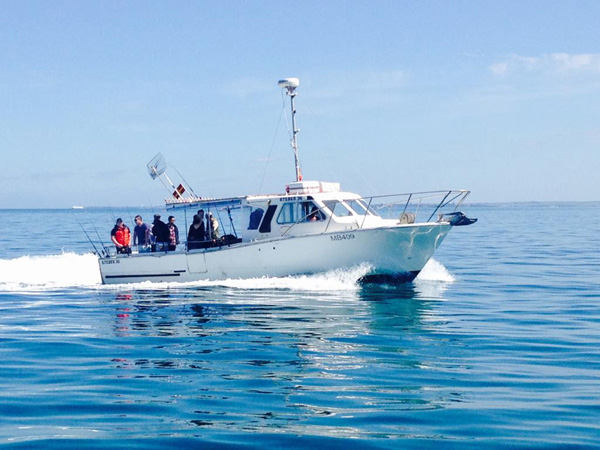 4 or 5 Hour Private Charters including Sausage Sizzle BBQ. Great idea for the next Bucks trip, gather your mates and get out for a fish.

Under 18 or 70 years and over, pensioners and seniors card holders dont need a fishing licence but everyone else in between does. You can buy yours online at Victorian Recreational Fishing Licence